Finally I’ve made a breakdown of my facebrush animation. Please check it out:

Read more info about the process in an article below:
https://www.behance.net/gallery/27937763/Facebrush-commercial-animation-(Behind-The-Scenes)

That’s a pretty interesting course about what’s used not to be talked loud – beauty retouch.

There’s not much good info about the subject, so this course is one of the rare stories about what’s done behind the secret doors of showbiz & beauty.
Personally, I expected to see some super secret tricks here, but for those who expected the same – need to tell, that there’s nothing fancy here. Just HARD WORK.

Yes. Beauty retouch is 90% about very hard and monotonous labor, some artistry, and much of knowing what you’re doing.
Nathaniel Westveer has a very interesting work style – he always does exact strokes, always erases all dots from Roto brush spline, leaving just 3 or 4, and is very precise in his actions.
His attention to detail would make you crazy in the middle of the course – cause he can literally paint 1 pixel for half an hour, getting it exactly and 100% right. That’s a good approach, and most of us need to learn the Perfection Level he’s possessing.

He’s talking about many things – starts with retouching little face issues, blemishes, etc… then going through the body retouch (slimmer belly, etc), tattoo’s removal, teeth retouch (omg, that was looking like pure hell, but he did it!), then make-up secrets (yeah, you girls will finally know how to paint your face right, in terms of beauty science), and non-symmetrical faces morphs and fixes (moving nostrils 2px here and there until it looks the prettiest).
Finally he finishes the course with a full session of girl retouch (see screen-shot), speed-up to 5x I guess, explaining every action he does.

Overall, the course is interesting and “wow” to watch, although some moments were dull, and some weren’t told to as far as I wanted to know. But nevertheless, taking into account, that there are not so much video beauty/retouch courses on the web – that’s a great thing to see.

I’m happy to announce that I will be giving a speech at the biggest russian-speaking CG/VFX conference in Moscow! CG EVENT 2014 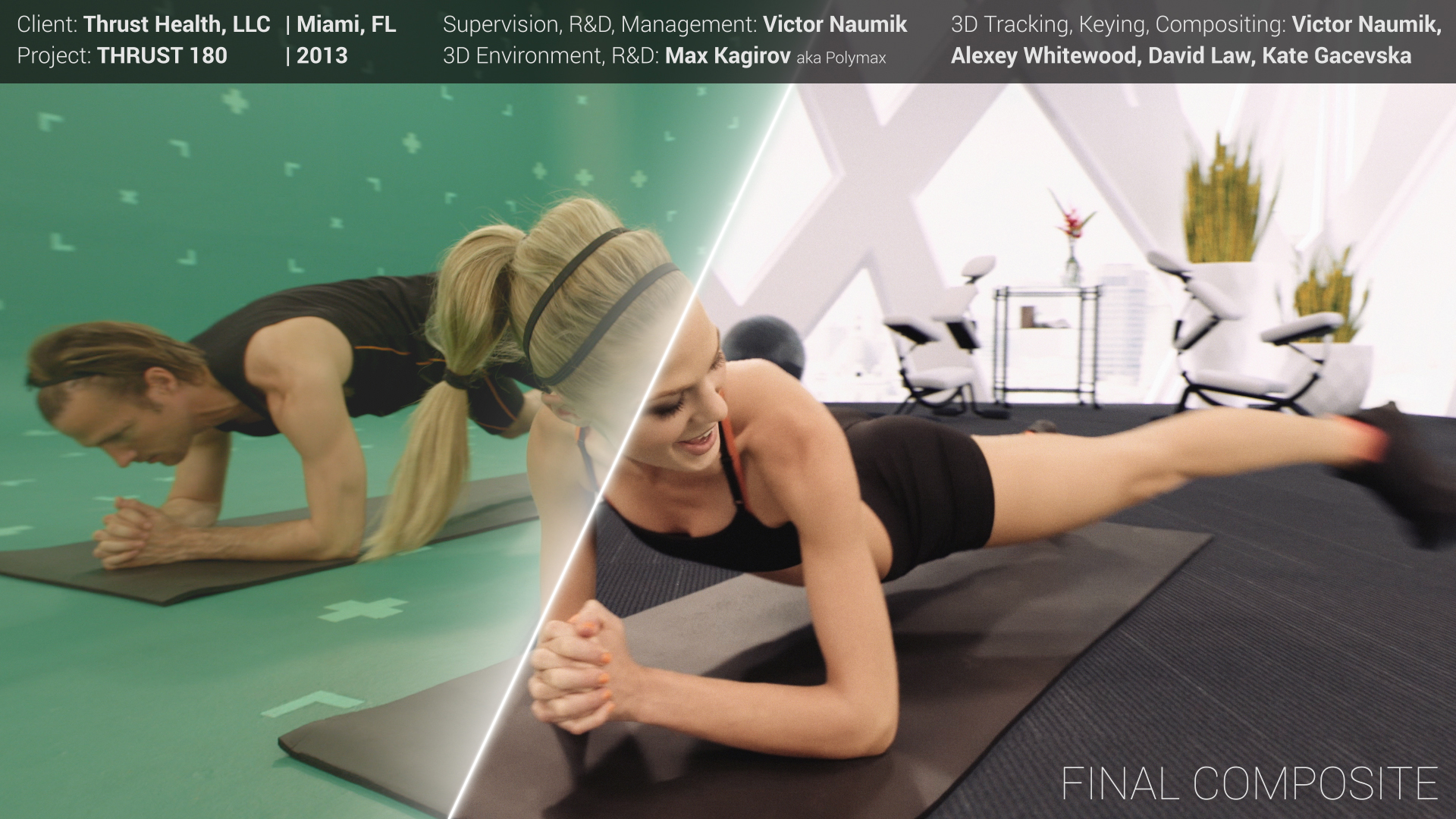 You are welcomed to meet me and listen to my story Saturday, 13 Dec, 6 PM Moscow time.

I will tell about the crazy year I had managing a big VFX project.

This course is finally the real deal!

Chapter 2 throws us in the middle of production, by removing every visible person or car from Mexico city shot. 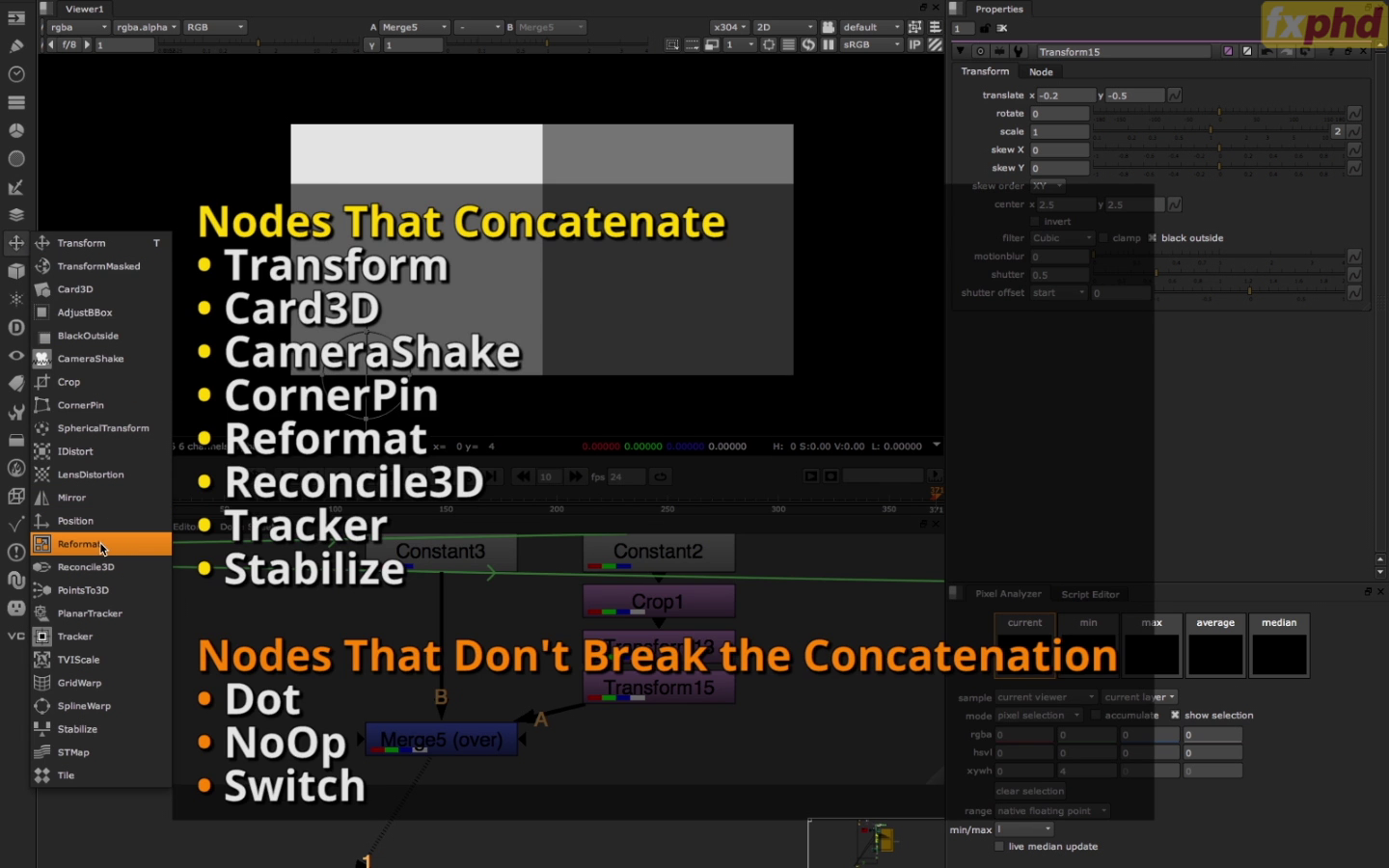 Then you get a deep 3d tracking excursus with some python basics, error checking.

in nukescript (in labels or knobs) you do [knob something], or [value something] if you need a final value calculated.

After that goes the face-tracking (without inner-face motions/emotions), followed by live brushes & some “digital makeup” (or makeover, I should say).

Next you dive into Python scripting, making snippets, generating nodes and links between them. The explanation is very simple to understand (although I knew python before :)).

And lastly the Nuke<>Mari linkage is shown on an example of erasing cars from the road fly-by. 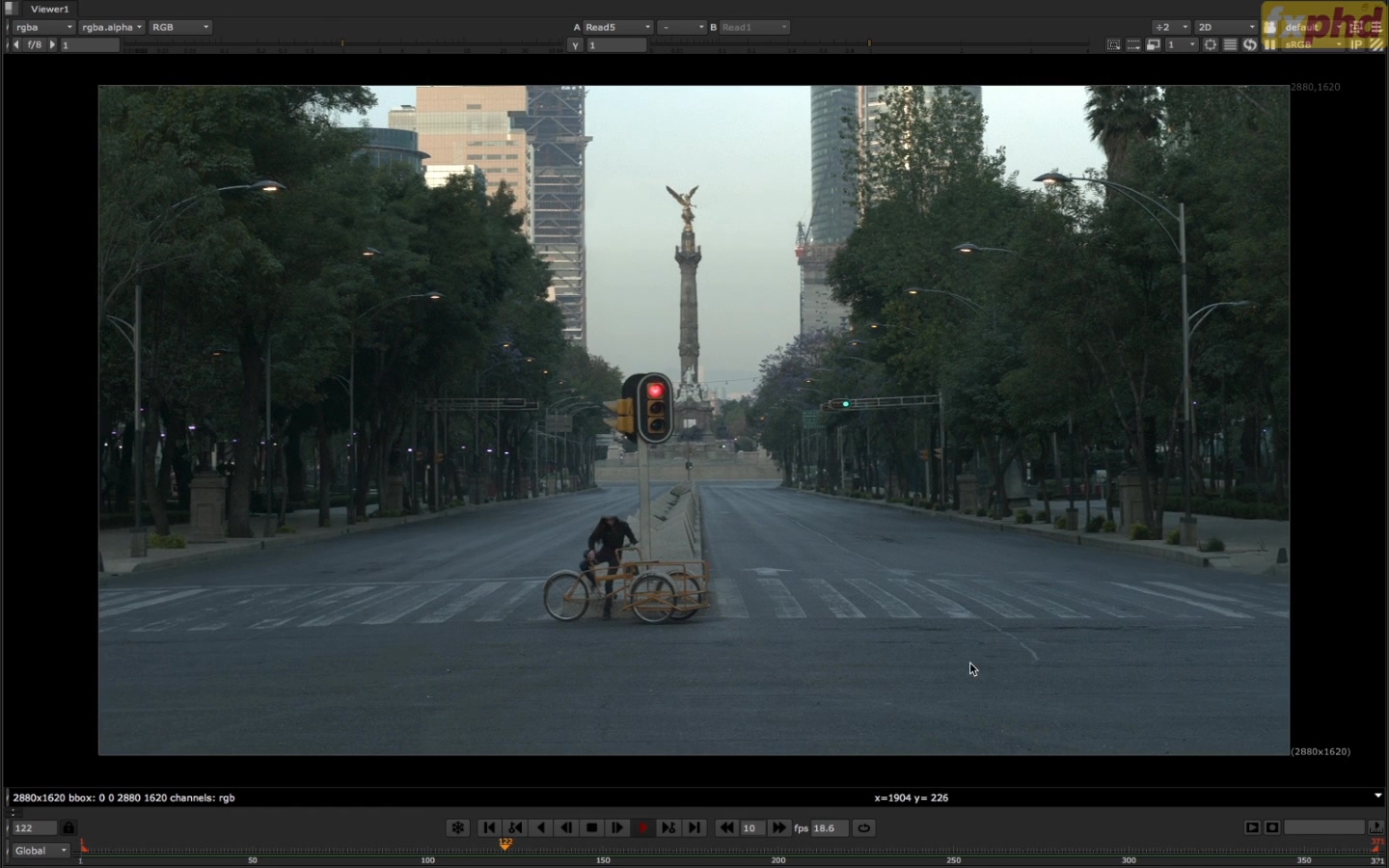 Generally, the course was useful. Many of good and deep production techniques and conventions are shown (e.g. making projection cameras blue).

It’s taught by Victor Perez, and believe me – this guy knows what he’s doing, and has a very deep production experience, and that’s seen in every motion and explanation. He likes to get deep into detail, showing the importance of every little step. I liked his approach very much, and no questions arose in any of the steps. Despite of his “mexican-english”, he’s easy to understand, and the video can be watched in 1.3-1.5X speed with ease. Although there were some moments when I turned it down do 1.0X where there was too much knowledge/per second 🙂

NUK214 – Nuke and the VFX Pipeline

Now I’m watching NUK214 – and it’s much more interesting, and many cool points and workflow tricks can be taken on a pencil. 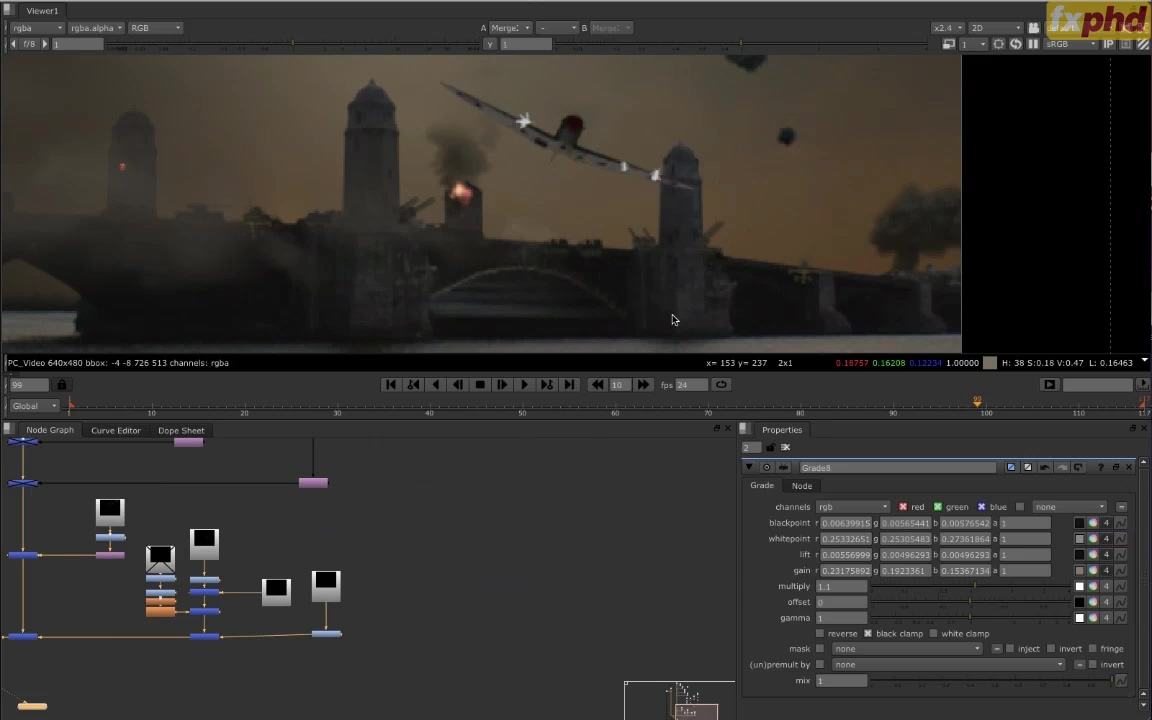 The first thing to note is workflow folder structure – they have well organized it by client, by project (year & proj#) and then images, io, references, and source work files.

The first roto class was awesome and quick. Mostly I liked the complexity of scenes (although it can always be more complex). Helicopter wire clean-up was a bit more boring, I was waiting to see explosion&heli mattes creation, but they just imported them. City aerial shot cleanup was more interesting, although I would like to do it in another way (nothing mentioned about ground plane), and also see how they deal with car reflections in buildings that are left 😉

The cool thing I noted is a Precomp node shared path in it – they use it to parallel the studio work – so one person can do a quick mockup of a roto, save it as .nk on shared drive, and another one can start doing clean-ups, importing the roto NK with a Precomp, then reloading it along the way it’s done by another guy.

Photography modeling looked great as a preview, but was pretty boring to watch, although some key image-modelling & projection techniques were shown.

Then there was a channel overview (basics mostly – how to deal with layers & channels inside a node, how to merge them, etc).

Followed by render-passes breakdown & compiling (on a somewhat too simple example). But that should finally cover the “show me how to compile render passes in Nuke!” questions once and for all – who wanted to learn this – must watch this.

And the course ended with a bridge shot transformed to WW2 chronicles video – with airplanes, gunfires, etc. Was somewhat boring mostly, but many important techniques were shown, such as:

– and what was most interesting – using the STMap node with rendered UV channels for adding gunfires onto a rendered plane (without tracking it). You can also replace textures with that, or draw on them to add decals, etc.

Well, anyways, the course was much more interesting to watch than previous NUK210, although some places were a good insomnia pill too (especially when watching in bed :-)).

I guess I should write notes as long as I watch my FXPHD courses, and give reviews on them – that’ll help me to remember key points I liked most, and also for other people to get some opinion on different courses available.

The samples don’t look too “production”, and are more simple, maybe because the course is old and simple too. It was boring for me to watch, and it was a good insomnia pill too, so I watched it 2X, (although I got a couple of points for myself, not so important to mention). Especially the laptop screen “reflection” gave me a good laugh.

Well, still it can be recommended to pure VFX noobies, who want to see what’s Nuke is all about, and what can be done in it, in a funny way.

Good tip: shortcut Shift+X to change A & B inputs of Merge and other nodes. 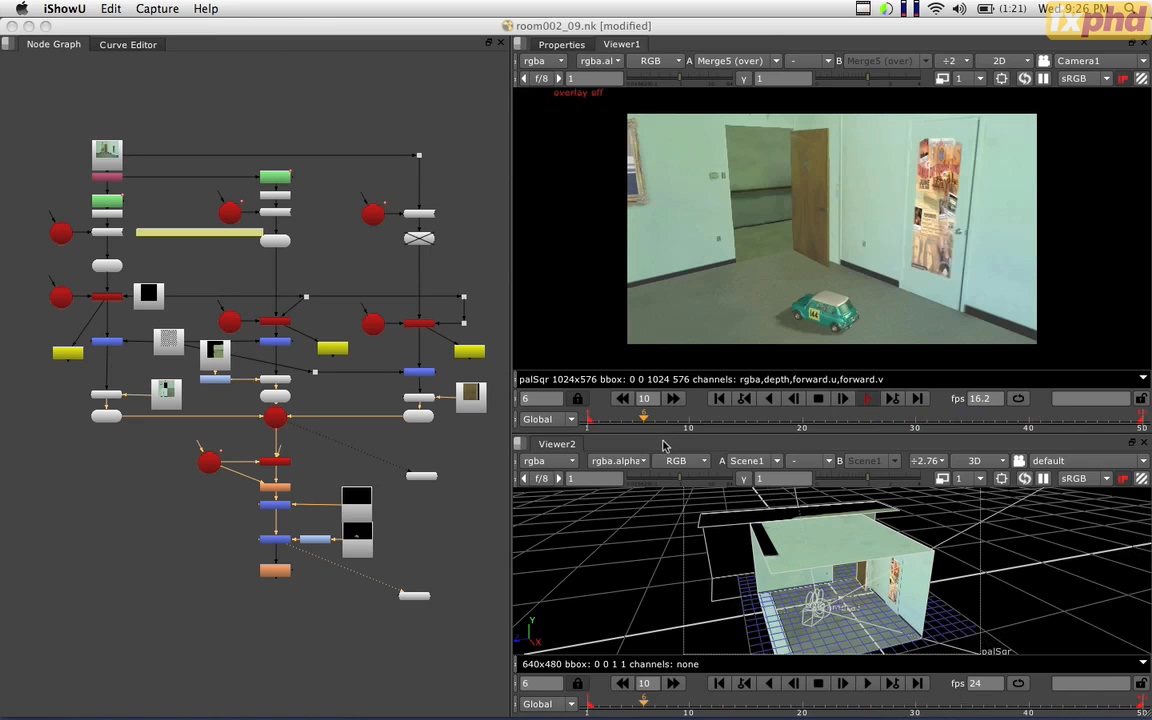 Well, that should be it, right?